Imagine you’re leading an elite team charged with developing a top-secret project. Naturally, you’ll need to conduct daily discussions, initiate brainstorms, and work together in “satellite offices” to eliminate all obstacles in your path.

Now imagine a member of the team, who is critical to your project’s success, is permanently stationed in a remote location. This is precisely the scenario in which the team members of MREN (Metis Real Estate Network) found themselves.

Headquartered in San Diego, MREN is a software company developing a platform to transform the commercial real estate industry. The firm also has an office in San Francisco, and a remote team member, Senior Vice President Blair Buick, who works from her home office in Arizona.

Recently, Buick teamed up with several San Diego-based co-workers, including MREN’s Chief Technology Officer Edwin Liu and product manager Jim Fitzpatrick. The group was in charge of an exciting new financial software project. However, the project required daily meetings in which the team needed to engage in discussions, share their screens, and work out solutions to potential issues using a whiteboard.

To help Buick connect and collaborate, MREN had previously tried a variety of video solutions, including join.me, Skype and GoToMeeting, but each seemed to create more problems than they solved. Next they considered a video solution from Cisco, but the hardware costs were prohibitive. Finally, Liu was researching ways to make conference calls better when he discovered Highfive’s unique approach to video conferencing. Shortly thereafter, he used Highfive to transform Buick into a robot.

“Highfive works really, really well for us. In the beginning, we placed it on top of a computer monitor at the end of our boardroom table and had Blair join us that way. But then someone had the idea of putting the screen and Highfive video device on a wheeled cart and the “Blair Bot” was born,” explains Fitzpatrick.

Whether “Blair Bot” is positioned at the end of the boardroom table or wheeled over to the whiteboard, Buick is able to see what’s written, share her screen and view her co-worker’s screens, and interact with everyone in the room.

“Highfive makes it feel like Blair is actually in the room with us. We’ve even made jokes about making the wheels on the “Blair Bot” motorized so she can take walks around the fountain in the courtyard when she needs to think,” says Fitzpatrick. 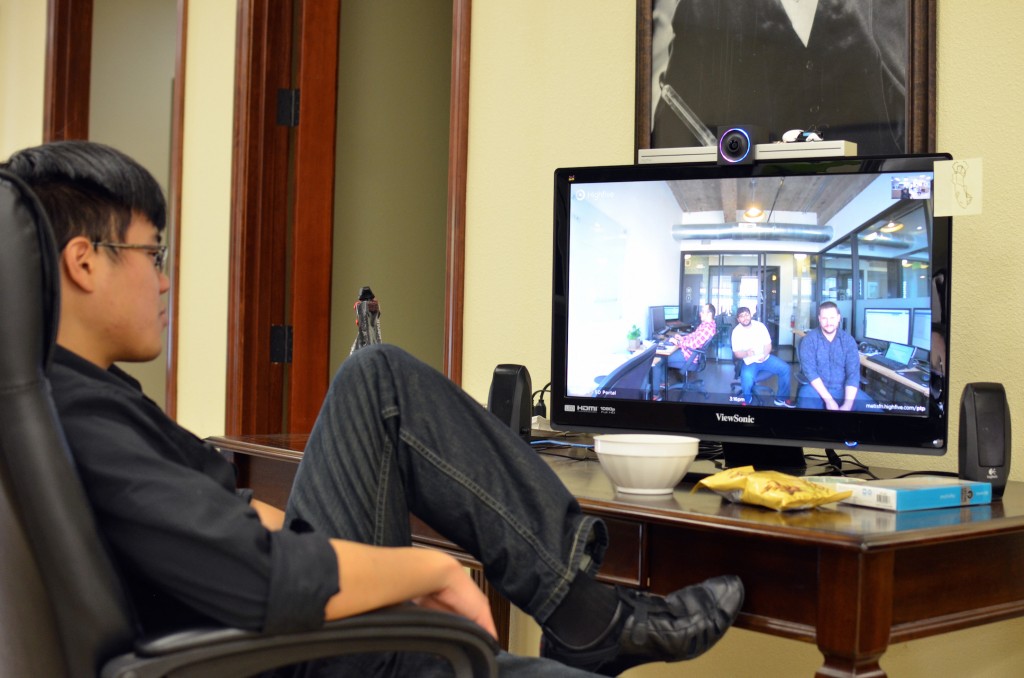 Setting up a video portal between offices using Highfive makes it easy for the MREN teams in San Diego and San Francisco to have impromptu check-ins.

Beyond enabling Buick to morph into a bot, Highfive has also fostered more efficient communication and greater collaboration between the San Diego and San Francisco offices.

“We were working on another project that was being headed by San Francisco, and Edwin and I were constantly jumping into chat rooms with them to discuss things like where to place a button and menu color options. It was so inefficient,” says Fitzpatrick. “That’s when we decided to use Highfive to set up an office-to-office video portal.”

MREN placed Highfive devices in the main work areas of their San Francisco and San Diego locations. The devices are always on, so team members can simply walk up to the TV and have impromptu discussions with one another whenever they wish.

“We definitely enjoy Highfive. It gets used heavily, and we appreciate the efficiency and close connections it has created between our offices and our employees,” says Fitzpatrick.